I am sending you, my readers an abundance of New Years optimism. I know its late, however it’s always a good time to transmit good will.

I am sending an affirmation to all, who will read this scribe, for every year to be superb, take a chance and enjoy your life.

My blogging in the second half of 2017 was all about our active Volcano, Gunung Agung. I felt obliged to update my Community of readers regularly about our “Big Fella”,I became obsessed with the process of the Volcano.

Although I still keep a close eye on our “The Big Fella” I now feel calm, knowing that the activity of the eruption will follow the course of nature.

My interview with Mangku Bon  has left me feeling composed and focused on what is important.  My daily ritual of prayer and meditation continues to keeps me aligned. I believe that faith is a constant reality of truth.

I am joyful, my soul is filled with gratitude every day I wake up on this beautiful planet we all occupy.

It is my intention to inspire my readers, to seek out a positive outlook even when faced with the toughest of challenges.

I am optimistic and excited about the future for our majestic Island of the Gods, I feel blessed to be living in Bali at this time in history.

I was thrilled to be interviewed by news.com.au  about my fascinating meeting with Mangku Bon, additionally the story was featured in the International Business Times.

For now I will resign from my self appointed role, which was updating my blog on the activities of Mount Agung. Check the Official site MAGMA regularly for updates.

What I would like to diarize in this blog, is my enthusiasm and excitement I feel this year.

I envisage a fresh wave of confidence for the future. Reinforced by my creative muse Oprah and her unforgettable speech at the 75th Golden Globes Award Ceremony on January 7, 2018.

A New Day is on the horizon

There are so many reasons why the 75th Golden Globes Award Ceremony was one I will never forget. My admiration for the actress and activists campaign hit close to home, my own involvement in advocating for survivors of domestic abuse has also been phenomenal.

How incredible that A list actresses Susan Sarandon, Meryl Streep and Laura Dern amongst others wore black as a sign of respect for victims and survivors of domestic violence.

The scene was dramatic, the world wide audience was made aware of the Time’s Up Campaign , an initiative which is raising money for the legal defense fund, this fund will provide support to victims of sexual harassment and assault.

The campaign also seeks inclusion, equality and parity for women and marginalized people across all industries.

A powerful moment in the show was when Reese Witherspoon accepted the Golden Globe for Big Little Lies, which won the Best Television Limited Series or Motion Picture made for Television.

In her speech Reese gave thanks to the many women who had broken their silence, she reassured the audience by saying,

“Time is up, we hear you, we see you, and we will tell your stories”

Finally Oprah was welcomed to the stage by Reese to accept The Cecil B. DeMille Award, which is an honorary Golden Globe Award bestowed by the Hollywood Foreign Press Association, for outstanding contributions to the world of entertainment.

I was in awe, in fact I needed to find her speech on social media to play it over and over again. 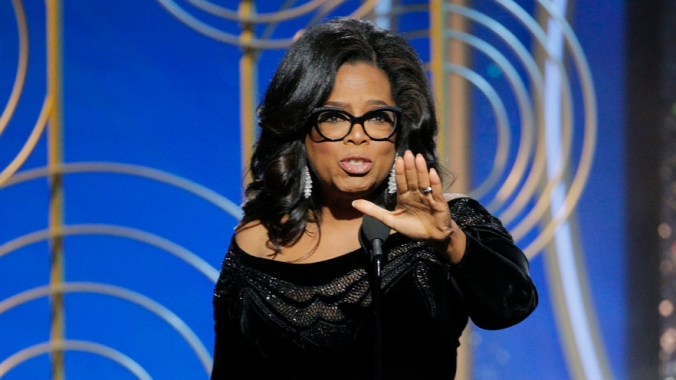 Oprah began her speech by talking about herself as a little girl in 1964, sitting on the linoleum floor of her mother’s house in Milwaukee, watching Anne Bancroft present the Oscar for best actor, which was awarded to Sidney Poitier at the 36th Academy Awards. She went on to talk about her Mum being bone-tired from cleaning other people’s houses.

It was incredible, the first page of my memoir starts in 1964 when my 21 year Mother was sitting on the floor with her baby girl. She was in her suburban home in Melbourne watching a small black & white television as The Beatles arrived to a frenzy of hysterical fans.

Could Oprah have read my book?

I don’t know the answer to that question yet, however what I know for sure is this. It doesn’t matter if Oprah has read my book, I now know that my heroine thinks like me. I am still dumbstruck by the similarities.

The rest of her speech was truly phenomenal, my friend Lisa Zimmer summed up my feelings perfectly when she wrote on her Instagram Post,

Watching Oprah receive the Cecil B. DeMille award last night showed such poignancy to our nation, and to those watching our country.  We saw a woman with steadfast integrity, awareness and intelligence stake claim to the power of standing in truth.
We watched as a country that currently struggles with truth and security, validate the importance of standing in integrity.
We saw that power and strength does not lie within a specific gender, but within truth.
We witnessed leadership in a woman who silently, has mentored millions, simply by showing up in authenticity.
She has showed us that shattering illusions created to repress aren’t just possible, but applauded, because by speaking truth, we create positive change.
We saw a leader last night, a leader for all of humanity. God bless you Oprah for all you have created in our world.

I will sign off my first blog for the year and reiterate wise words from Oprah, the beautiful soul who continues to guide me in my creative accomplishments,

“What I know for sure is that speaking your truth is the most powerful tool we all have,  I want all the girls watching here now to know that a new day is on the horizon”

Scarlett Voices In the Shadows