Our mighty Mount Agung continues to surprise us.

Living on the Island and documenting my feelings has certainly been an interesting exercise.

It’s hard to believe this is my 18th blog since my first live stream on the 24th September, 2017.

I tried to stop writing about “The Big Fella”…. (I wonder when I decided to call him that?), it is impossible though as he has enticed me hook, line and sinker.

Our Holy Gunung Agung is a powerful addictive drug and I am at his merci.

I am flattered that members on facebook groups are also using his nickname I coined affectionately “The Big Fella”.

Some argue that he is not a man, he is a woman.

Some argue that he just a bloody Volcano, why talk about him like he his is human? They may have a point, however I feel as though he is a man, just as the Balinese Hindu Religion believes he is the masculine Holy Mountain and that Mount Batur is a female because she is surrounded by water and is smaller in size.

Our man of the moment has woken us up and I am now sitting in front of the computer frantically searching, scanning, researching and seeking information.

In addition to Vlogging and hobbling beside Made (my toe is still not 100%) on our morning walks to take live footage of Mount Agung.

This week has been intense.

I believe most people here on the Island who have been following the progress closely believed our guy would have fully erupted by now. He has not.

Monday evening after scanning through my twitter feeds I discovered Mount Agung was the leading story on the The New York Times twitter feed.

I was so impressed I took a snapshot and posted it on my Instagram page.

The following morning I was sleuthing online when I discovered the source of the magnificent photograph the New York Times featured.

I also read on Made Nagi’s Instagram feed when a reporter from Reuters contacted him to ask permission to use the photograph.

What an instantaneous world we live in. I was so captivated by Made Nagi’s image which prompted me to write a caption. I felt as though Mount Agung was sending me a message.

Black and white, Hitam dan Putih, Saput Poleng, good and evil, truth and lies. I believe the answer we are looking for is hidden in our Mighty Mount Agung. Which side do you choose?

Black and white is significant in the Balinese Hindu Religion.

If you look around you will notice the black and white check cloth called Saput Poleng draped around temple, statues, trees and worn by people. The spiritual aspect of Saput Poleng signifies good and evil and somewhere in between.

The air we breathe is different now.

When Made admits there is a change in the air then I know it’s serious.

It was confronting looking at a visual of our beautiful Island covered in red when I read an article written by Earth Observatory.

I decided I should wear my mask more frequently, even on a cloudy day some satellites excel in detecting components in the atmosphere that are invisible to human eyes, such as sulfur dioxide (SO2).

I refuse to worry or give into fear, I was a smoker for years. I reckon my lungs can take toxins for a while.

I refuse to be vindicated for speaking the truth about how I feel living through this phenomenon on the most magical place on Earth. 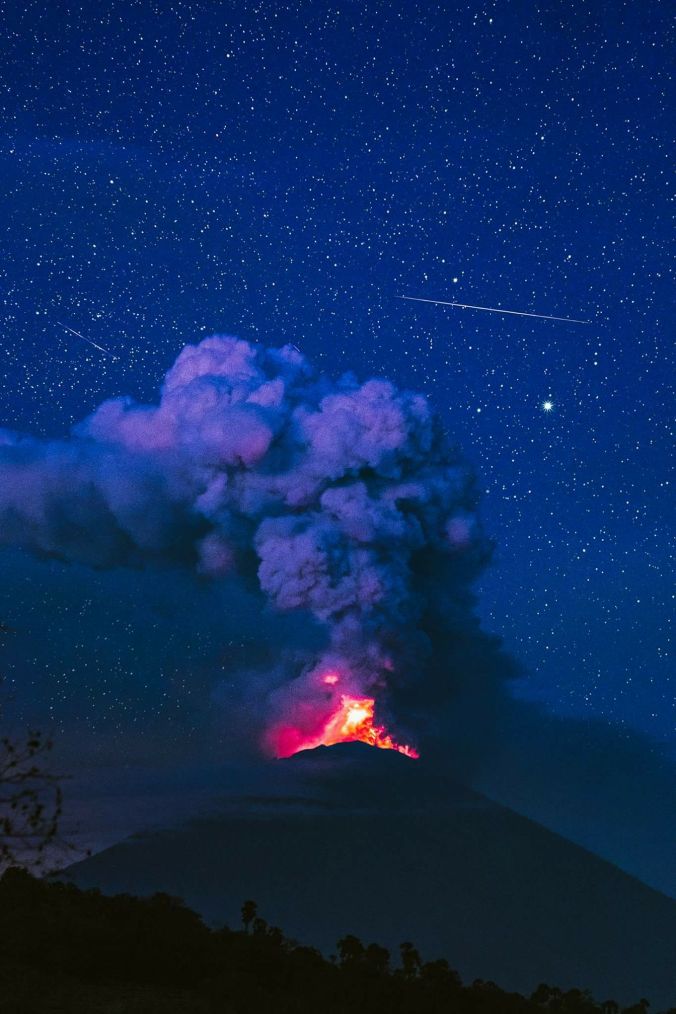 The seismic monitors have been going berserk, inside the Volcano a powerful cocktail of molten rocks, fluids and gases move from deep within the earth to the top.

We have seen spectacular photographs of images showing thick plumes of steam and ash being bleached out. I have been following Dr Janine Krippner who is a Volcanologist on twitter, her fabulous description of what is transpiring on the mountain has been reported worldwide this week.

Yesterday something else emerged, there have been reports of groans and noise coming from within the creator. We have also had reports of the earth moving unlike an Earthquake. A friend posted on facebook,

“OMG Just had a burst rumble from underneath, not like anything I have felt before. Like a pressure cooker lid blowing off”

Approximately 100,000 people have been directed to leave their homes and relocate to evacuation Centers.  Kopernik, Mount Agung Emergency response fund has been set up. Please give generously.

For up to date official warnings, please go to MAGMA Indonesia.

Bali’s only airport was closed. Then it was open. I cannot report on the status of the airport or flights, everything is at our fingertips now. The answer to these questions can be found out 24 hours a day online.

The only thing we cannot find is when our “Big Fella” the star on the worldwide stage will do his final performance.

As one of my friends reminded me, in 1963 Mount Agung took 12 months to fully erupt…. is this a mini series or an epic movie?