After such a crazy week breaking a toe and having my teeth filed… yes I am serious, I had my teeth filed by a Balinese High Priest known as a Sulinggeh, in an epic 30 hour Metatah ceremony.

Here is a sneak peak before we talk about the “Big Fella” and his grandstanding in the last 24 hours.

We awake early every morning (it’s impossible to have a lazy Sunday when you live in a Balinese family compound).

I was scanning social media when I noticed a post by a friend on facebook, the caption read, “6am Bali time…. It’s pumping”.

The photographs and video footage was astonishing. 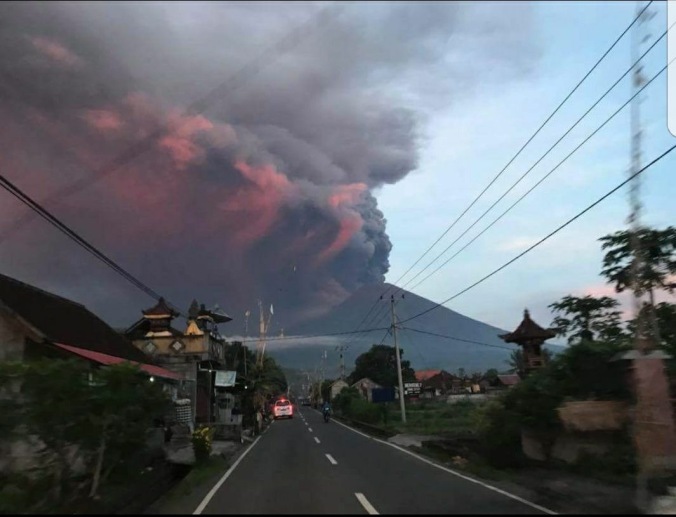 I jumped out of bed trying to ignore my aching toe, I yelled out to Made to wait for me before he took off to walk our three dogs (did I mention we have another rescue mutt?). I needed to check out Mount Agung in reality.

I couldn’t quite believe it when I saw a huge plume of ash billowing high into the sky and spreading.

I was hobbling behind Made while I was trying to record on Instagram in addition to scanning updates online to reassure myself I wasn’t hallucinating.

Today has been sensational, almost surreal. It’s hard to believe after all this time our “Big Fella” is finally erupting.  Follow MAGMA Indonesia for official updates.

I can confirm that Bali’s only airport which is called the Ngurah Rai in Denpasar is open, however you will need to check with your airline as there is a tremendous amount of confusion about flight schedules.

I am not going to write about the technical details of our “Big Fella”, he is putting on a spectacular show.

Mount Agung is the star, the experts are busy analyzing data, observing and waiting. 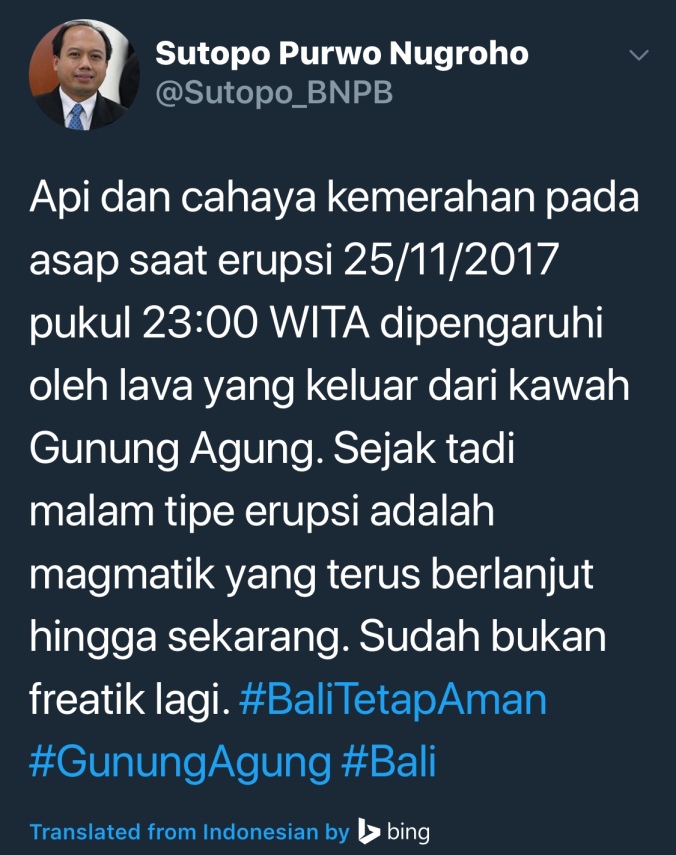 Fire and light reddish on the smoke when the eruption of 25/11/2017 at 23:00: influenced by the lava is coming out of the crater of Mount Agung. Since last night is a magmatic eruption type continues to the present.

Let’s wait and see what the next exciting development may transpire in our extraordinary real life stage called Bali.

UPDATE 27 NOVEMBER
CAUTION MOUNT AGUNG, increased from ALERT STATUS TO CAUTION Mount Agung eruption continues to increase. The rate of eruption of the Great Volcano now rises from the phreatic to magmatic phase (since the observation of the fire at the peak at night on 25/11/2017 at 21:00 WITA.) Until today the magmatic phase eruption accompanied by constant thick ash of ash reaches a height of 2,000-3,400 meters from the peak . Continuous ash puffs are sometimes accompanied by explosive eruptions accompanied by a weak sound that sounds up to 12 km from the summit. The rays of fire are increasingly observed in the next night. This indicates the potential for a larger eruption is imminent. To anticipate all possibilities and risks of disaster, PVMBG has raised the status of Gunung Agung from Alert (level 3) to Awas (level 4) starting from 27/11/2017 at 06:00 WITA. Status Beware is the highest status in volcano status. Mount Agung observation post in Rendang sub-district of Karangasem Regency reported that the visual visuals of the mountains are clear. Cold-pressure crater smoke is observed in gray with a thick intensity and height of 2,500-3,000 m above the top of the crater. Observed eruption with 3000 m high and gray smoke color. Visible light rays. Non continuous harmonic tremor amplitudes 1 – 10 mm (dominant 1 – 2 mm). Communities around Mount Agung and climbers / visitors / tourists not to be on, do not climb and do not do any activity in the Danger Estimate Zone that is inside the crater area of ​​Mount Agung and in all areas within a radius of 8 km from the crater of G. Agung and added sectoral expansion to the North-Northeast and Southeast-South-Southwest as far as 10 km from the crater of G. Agung. Estimated Zone The dangers are dynamic and continuously evaluated and can be changed at any time following the most recent / latest Gunung Agung observation data. BNPB coordinates the national potential of TNI, Polri, Basarnas, Ministry of Public Works, Ministry of Social Affairs, Ministry of Health, Ministry of Transportation, SOEs and others to assist the Local Government in handling eruption of Mount Agung. National Counseling Posts have been activated in Kabupaten Karangasem. BPBD together with other elements continue to perform emergency eruption of Mount Agung. People within a radius of 8 km and 10 km of expansion are urged to immediately evacuate in an orderly and calm manner. Some people have been self-evacuating since 25/11/2017 night following the eruption of Mount Agung. Sutopo Purwo Nugroho Head of Information Data and Public Relations Center of BNPB