One definition of pride is as follows:

A feeling or deep pleasure or satisfaction derived from one’s own achievements, the achievements of those with whom one is closely associated, or from qualities or possessions that are widely admired

My original thought about this blog was to write about my Journey so far in LA, however the last month has been such a fast pace of a mixed bag of emotions, adventures and craziness it’s hard to pinpoint one topic to write about.

I was considering writing a blog titled The Hollywood Hustle, I changed my mind (this time).

Yesterday I was listening to a conversation whilst I was travelling. The topic of conversation between two women was about parenting. The older woman was describing how she was teaching her daughter the importance of being proud.

This conversation was heart warming.

Ebony described how she encouraged her teenage daughter to walk with a straight back, to take pride in her appearance, to participate with her team mates in her chosen sport (which she changed regularly, but that week was hockey) forget about the drugs and the dark influences that were all around her in the hood.

I joined the conversation with these two women and mentioned that I felt inspired after listening to them interacting.

This conversation took place between two women who had just met.

I sat down at my desk this morning and decided to tip tap away at keyboard and see what transpired.

Before starting my blog I checked social media. To my surprise, I was overwhelmed with elation when I discovered my son James Rowland had been featured for the 2nd week running as the dedicated feature writer for Survivor New Zealand.

For anyone who has read my memoir you will be aware of my son’s obsession and commitment to the long running TV series started when he was only six years old.

The pride I am feeling now is beyond the written word.

My past month here in LA has certainly been an education. I have met so many people, been educated on an array of topics (predominately the entertainment industry) listened to and been involved in a feast of intellectual brain stimulate from people living in the diverse demographical expanse of Central LA.

One thing I have learnt so far is this:

The most important lesson I have learnt in the past month is to give gratitude to these mystery of people.

I have been reminded to honour chance encounters with our fellow humans, who are always around us if we open our senses and embrace the unknown.

Finally I have learnt to be proud of my own achievements and to keep forging ahead to catch that star which is always there.

Just look up – and then one clear night she will sparkle an infinity of rays so brilliant the unthinkable will become reality. 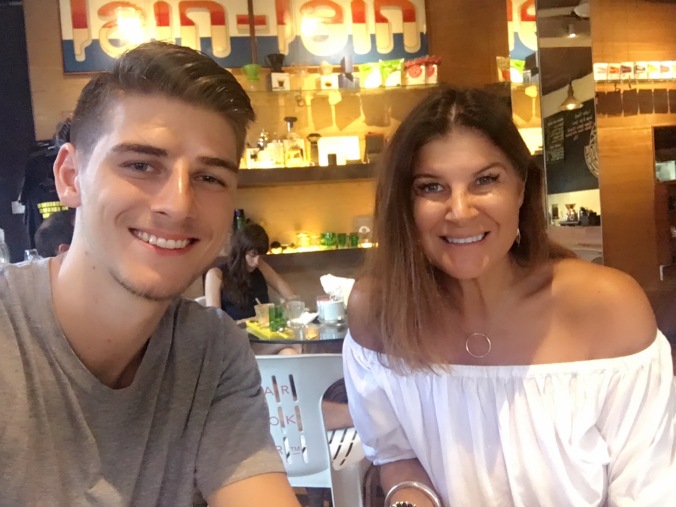 With my son James Rowland, blogger for Survivor New Zealand